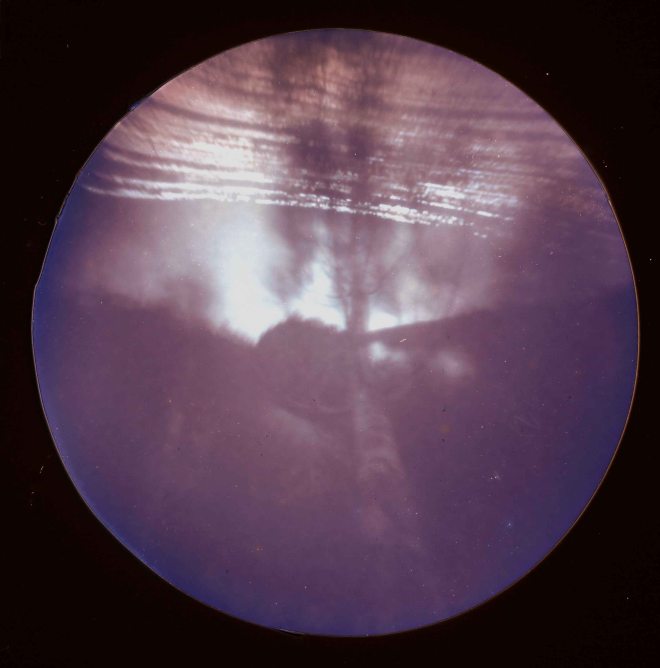 I processed ten out of the 26 cameras we picked up from Indian Pond to Skowhegan. Because 18 out of 44 we set out were missing I’ve been handling this batch with kid gloves. With nitrile gloves to be precise. I didn’t want to get any fingerprints imbedded into the photographic paper that would show up when they were processed. I used tweezers to get the paper out of the smallest cameras. Out of the first 10 processed I came away with 3-4 images which will be in the running for the exhibit

We tried to figure out why people are compelled to take down the cameras. The only answer I could come up with is that they think their image is being captured. They tear down the camera and open the box. I wonder what they think when all they see is a piece of white paper glued into place. Then they throw the camera in the river along with their Budweiser bottles. (I’m thinking of asking Budweiser to pay to clean up the river in the fall. Most of the broken bottles I had to avoid while climbing down embankments to get to the river had their label) When I got to a location and found the camera missing, I did look around to see if they threw them in the bushes. Only two out of the 18 were thrown on the ground. Even with all the labels I wrote on the cameras, people still had to destroy them.

For more information about the exhibit: Maine Museum of Photographic Arts, Maine Photo Project, Diary of a River