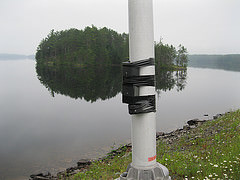 I’ve made several kinds of pinhole cameras over the years. The first one I made back in 1988 was out of fome core and I made it to use with SX-70 Polaroid film. I’d call it a failure. I didn’t have the proper hole diameter for the focal length and, after going through a box of film with no success, I tossed it. Since the Impossible Project started making their own versions of Polaroid film I’m thinking again of making another box camera for SX-70 film.

I’ve had success with simple pinhole cameras made with tin cans and using photographic paper. I’ve used coffee cans, Altoid tins, band-aid tins. I found some 8 x 10 film holders at a local antique shop and built a fome core camera for them and had good results, especially when I used the now discontinued Harman Direct Positive photo paper.

Coffee Can Pinhole camera used for my first six month Solargraph project. I duct taped it to a fence post. For this project I set out 3 cameras loaded with photographic paper. Because this camera was right out in the open in the field and we had a colossal series of ice storms in December of 2013, the photograph for this camera failed. I had to hammer the camera off the post because the ice welded it in place, and the ice seeped into the camera and saturated the photograph so much that the emulsion separated from the paper. Lesson learned!

These pinhole cameras were set out at the end of June 2014. I set out 3 in hopes that I will get one successful image. I used food tins with solid lids for these cameras.Here’s hoping we don’t get another ice storm before I get to retrieve the cameras